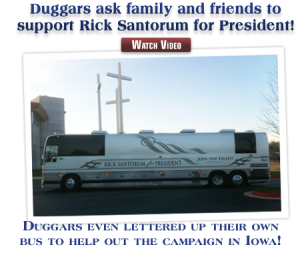 The Duggars on the campaign trail in support of Rick Santorum

The reality show family, the Duggars, are touring the Upstate of South Carolina this week. The family is on the campaign trail in support of Republican presidential primary candidate Rick Santorum. The Duggars are expected to make a 9:30 a.m. stop to visit with the public Jan. 18, at Christian Supply store in Spartanburg, SC.

The Arkansas family stars in their own hit reality show, 19 Kids and Counting, which chronicles the everyday lives of the larger than life family of nineteen children and parents, Jim Bob and Michelle both of whom home school all of their children.

As popular as the family is, they are not without their critics. The large family has been labeled as highly controversial by some, while others support the pro-life stance of the family and their religious beliefs.

Michelle was expected to give birth to her twentieth child last year, but announced in Dec. 2011 that the pregnancy resulted in a miscarriage in the fifth month. Recently the Duggar parents were scrutinized further for photographs taken of the still born child that were given out at the memorial service and leaked by an extended family member. One shot consisted of a close-up of a tiny lifeless hand place on Michelle’s finger, another of two tiny feet in the fingers of one of the parents.

A representative of the family initially said that the pictures were intended for family and friends only, but one picture and a memorial audio clip is now available on the Duggar website.

Despite the controversy directed towards their family, the Duggars have remained publicly open about their desire for more children and their commitment to their Christian faith which is a largely displayed in the show’s content.

19 Kids and Counting airs on Discovery’s, The Learning Channel.

For more information on the Duggars, visit their website: