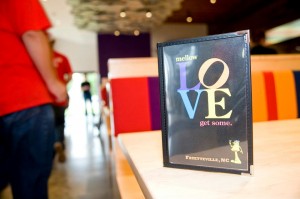 Sleek and mellow; the little mushroom commands it

FAYETTEVILLE, NC-Pizza has become one the americas favorite eats. Anything can go when it comes to pizza, but in a world where glueten free is becoming the norm, what pizza has risen to the challenge (no pun intended)? Now just in case you look at the name of the resturant and decide you would rather not, PLEASE reconsider. Imagine tasting a pizza made from spring water, which does have a distinct taste compared to other doughs made from the tap. Now how about fresh homemade ingridents  like garlic/pasta sauce, a freshly tossed salad, and a friendly atmosphere to boot? Well look no further because the California based resturant has found its way into Fayetteville, and these shroomies know how to make a pizza!
Right now they are promoting a “Holy Shitake Pie” that made my mouth water. Shitake, Portobello,and Button mushroom with just a drizzle of truffle oil make this pizza one to remember (that is if you are in to mushrooms). For the steak lover there is the “Philospher pie”, loaded with chunks of steak, bell peppers,m ushrooms and onion; which begs the question: why had no one thought of this sooner? I could go on about all their many other dishes offered, but I’ll let you come in and be amazed by your choices.
Not only is the food awesome, but their service is excellent also. Smiles and laughter can run abound, but when the rush comes they put their game faces on. There is a fine line between slacking off and being a uniform drone (which the later is often times the case), but these guys know how to pull it off. Mellowing their customers out is what they do best and these shroomies know exactly what their doing. You can find them on at mellowmushroom.com, or facebook. 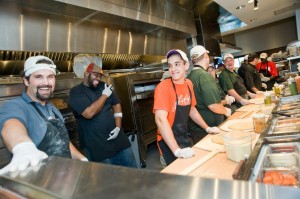